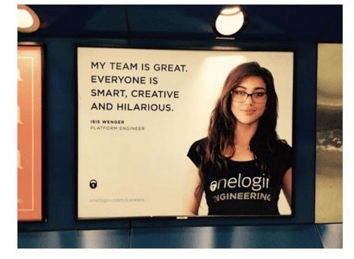 Yesterday a software developer spoke out in response to sexist comments that came from a recruitment ad she posed for. Isis Wenger expressed her feelings about the comments in her article on Medium, addressing the shocking nature of the threads and recounting some of her personal experiences as a female software engineer. She brought the culture in the technology industry into question, saying, “This industry’s culture fosters an unconscious lack of sensitivity towards those who do not fit a certain mold.” She finished the article, telling the world in bold: This is what an engineer looks like. Her claim included a photo and a hashtag: #ilooklikeanengineer.

Isis’ article brings up a very important point when it comes to the lack of women in the technology industry. It’s definitely not an imagined gap:

We looked inward after yesterday, and the overwhelming lack of women in the technology industry translates here, to our own organization. Of the 18 technology engineers we have on staff, only one of them is female. Stephanie McCaughey is our Remote Monitoring and Management (RMM) Admin and Backup Admin for Entech. We made quick work of making sure that Stephanie appeared among the sea of #iLookLikeanEngineer hashtags appearing on Twitter – but we realized that a picture doesn’t necessarily do her talent justice, so we decided to ask her a few interview questions to get some insight on what made her pursue a career in a predominantly male industry.

Did you always want to be in IT?
Yes. My dad was a software engineer so I’ve always had computers to mess around with and enjoy. Even as early as Elementary School, I had the position to oversee and help out the younger children when they had time in the computer labs.

What sorts of obstacles have you encountered as a woman in an industry dominated by males?
I wouldn’t say that I’ve faced obstacles, but I have had clients that are ecstatic when I walk in and they realize that I’M the technician, especially when I walk in to help an all-female doctor’s office! I take a lot of pride in that.

What advice would you give to other women that want to pursue a career in technology?
Study, study, study and create lab environments to play with. Be willing to learn from those more experienced than you and keep your memory sharp, as things are always in motion in our world. Think logically and analytically to solve problems.

What do you like most about your job?
I love the relationships I have with our clients and that they can place their trust in me to handle their environments and keep their businesses running. When I start working with a client and they say, “Stephanie’s working the ticket. I know it’ll get done right,” I inevitably have a huge smile plastered on my face.

We’re very honored to employ an entire team of talented engineers who are not just designated by gender, but many different unique qualities. We are nothing without the people on our team and the #iLookLikeanEngineer hashtag was the perfect opportunity to recognize one of them. Special thanks to women like Stephanie and Isis who are paving the way for other women to enter the technology field.

News + Awards People on the Move

Entech is pleased to announce it has completed its merger with ITVantage, bringing together the two leading MSPs serving the Southwest Florida market.

We are dead serious about data protection and committed to bringing that extra layer of expertise and peace of mind to our customers in Southwest...

We're honored to be recognized among the most prestigious list of managed service providers—a testament to our team’s commitment to doing what...

Get notified on new marketing insights

Be the first to know about new B2B SaaS Marketing insights to build or refine your marketing function with the tools and knowledge of today’s industry.